The Power of the EarthCorps Community

“How long have you been with EarthCorps?”

It’s a question I get almost every weekend from curious volunteers at the events I lead. I usually say since the beginning of 2016 when I started my first year as a Corps Member, but I always pause a bit before answering. Although this is my second year working at EarthCorps, I’ve technically been a part of the EarthCorps community for over ten years.

In 2006 my older sister, Rachel, participated in a program called Teens in Public Service, also known as TIPS. TIPS places high school students in paid jobs at nonprofits around the Seattle area each summer. Rachel landed an internship at a neat environmental organization tucked away in Magnuson Park. My family lived only two miles away from Magnuson, but we had never heard of EarthCorps. We thought the work they did sounded pretty cool, and we were excited for Rachel to begin her position there.

“Pretty cool” was an understatement for Rachel.

Her summer at EarthCorps allowed her to form strong relationships with people from all around the world. She played in soccer games and cooked meals with EarthCorps international participants from places like Tajikistan, Nepal and Colombia. To get to know more about EarthCorps, my entire family attended World Nights (the original “Global Café”) where international participants shared dances, songs, food and stories from their homes around the world. We met and became friends with not only the international corps members, but also the families who hosted them during their time with EarthCorps – homestay families.

It didn’t take much to convince my parents to become homestays themselves.

In February 2007 we welcomed our first international corps member into our house, Hala from Egypt, a woman who lit up our house with her contagious smile and smoky baba ganoush. She became another sister to Rachel and I, and we all still refer to each other as such. 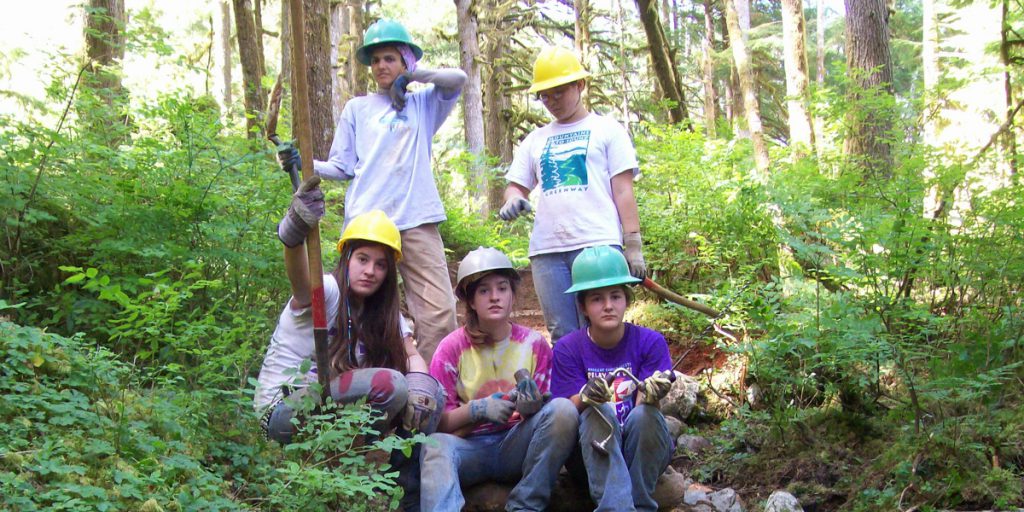 Because of Hala, that summer I participated in Mountain Works, a collaboration between the Mountains to Sound Greenway and EarthCorps that provided week-long trail building experiences for middle school students with EarthCorps crews. While I had previous experience camping, I had never worked on a trail before, never performed physical labor for more than a day or two at a time. At the end of the week I relished the ache in my muscles and the dirt that had accumulated on my arms. I loved working my body every day for multiple hours a day. I loved getting to know new people through working outside, and I especially grew closer to Hala through working on a crew for a week together.

My family hosted another international in 2010, Maria from Colombia, but EarthCorps dropped off my radar shortly after that. I graduated from high school in 2011 and attended college in Minnesota to study Environmental Studies and Geography. I worked outside occasionally, but most of my time was spent writing papers in front of a computer.

When I graduated from college in 2015 I was looking for a way to work outside again. I spent the summer after graduation as a naturalist, yet felt that the organization I worked for lacked a sense of community that I had come to value at my small college. EarthCorps appeared back on my radar in the form of an email forwarded from my mother stating that they were recruiting corps members. I decided to apply and joined the corps at the beginning of 2016.

I wasn’t expecting anyone at EarthCorps to remember me or my family after nearly ten years, but I quickly found that I was very much mistaken. Staff members remembered the summer my sister worked at EarthCorps and inquired about her; homestay families remembered Hala and Maria and my family, bringing up details from those experiences that I could hardly remember. There were even pictures from my time at Mountain Works deep on the EarthCorps hard drive, remnants of my first foray into environmental restoration.

These enduring relationships from 2006 and 2007 weren’t just flukes.

The relationships I formed with my fellow corps members over the course of 2016 were similarly strong. Whether we were slogging buckets of mulch up and down a muddy slope or building steps on a trail, I cemented enduring friendships with my crews and the other corps members. 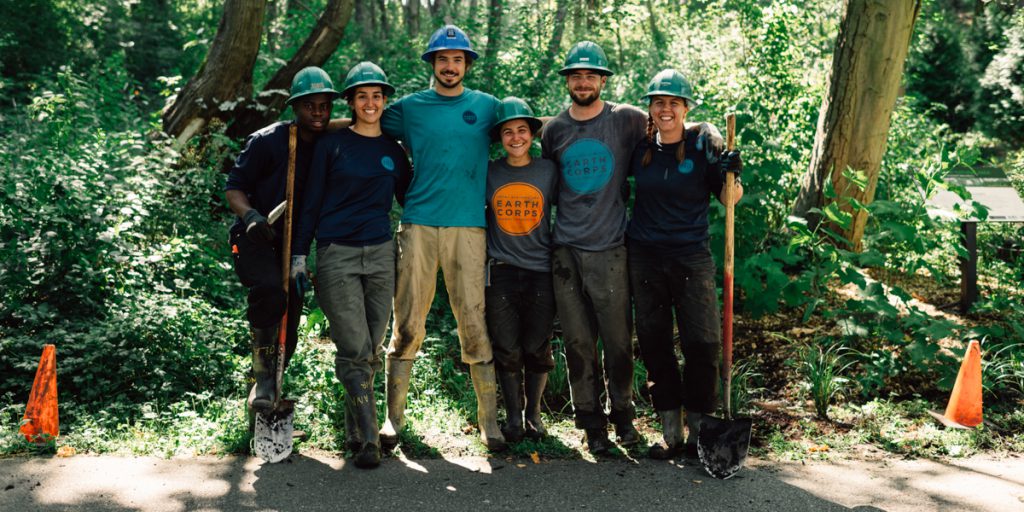 This unique community distinguishes EarthCorps not only from other conservation corps but from most other nonprofits. Walking into the office for my interview at the end of 2015 I could feel that there was something different about the interactions between staff members that I hadn’t felt at other workplaces. I have never been a part of a workplace where staff members wanted to form real relationships with everyone, from corps members to homestay families. I haven’t worked anywhere where the executive director joins us on the first day of work in a round of get-to-know-you activities.

This feeling and the community inspired me to stay on for a second year as a Volunteer Specialist, a position that has allowed me to deepen previous relationships and also build new ones with staff and community members.

I don’t know where I’ll go at the end of this year or what communities I’ll join in the future. But like the dirt that has settled into the crevices of my hands after a year of environmental restoration, I am going to carry this community with me wherever I go. And no matter how long it may be before I come back, I know EarthCorps will always welcome me again.