The Journey to becoming a Forester

I was a seasonal EarthCorps watering crew hire in 2006, right after I graduated from the University of Washington. I had never had a field job before EarthCorps. Ten years later, I now work for a public land management agency, and I don’t believe I would be on this career path that I love dearly without the ways that EarthCorps changed me.

Probably the biggest change in me after my time in EarthCorps was a new sense of empowerment. I realized that I could teach myself, leap in, and trust that even if I didn’t know something up front, I could figure it out.

Some call this a “can-do” attitude.  It started with little bits of empowerment: learn how a motor works here, learn how to care for tools there.  It turns out, I don’t need to be intimidated by 2-stroke engines, or anything else I don’t know about yet.

Before EarthCorps, I already cared passionately about forests and natural spaces. Growing up I  watched them get mowed down for housing developments at the edge of Portland’s Urban Growth Boundary and wondered when we’d simply run out of forest to convert and have nothing left.  The owl wars raging in the news at the time fueled my interest in forest management, but my worldview would have been instantly disregarded as… suburban.

I grew up in a forest, ran around in them – but I was never from a family of foresters, agricultural workers, or mill workers.  They all had something I didn’t have when talking about forest and timber issues – comfort, ease… Validity.

Growing up, there were life skills that I had wanted to acquire that might have made me feel more at home in these environments. For example, I wanted to take auto mechanics in high school, but it conflicted with AP Chemistry – Apparently I was the only one who resented the conflict between those two.

I didn’t think I had the gravitas of cultural experience for my opinion to be really worthwhile when it came to forest management. So, in unconscious steps, I shifted my focus to international climate change issues – being ethereal, it was really anybody’s game if you were willing to read enough.

I made a good go of it. I tried to make it work.  I tried to ignore what I really liked (let’s be honest: trees). After EarthCorps I had a great-sounding job at the State Department, but I worked for a supervisor who shamed me when I wanted to contribute to some of the more substantive policy issues occurring in the office (that’s the short story).  But surely, I was on the right track.

And now sometimes I think to myself: if I had never had that terrible boss, would I still be beating my head against that wall?

I went back to school for my Masters, with my tail somewhat tucked, but with an idea that maybe I could at least work on climate change as it related to forests – perhaps there was just a little teeny tiny bit of room for me there. I worked on the Yale Forest Crew as a way to get a season of training as a forester.  This could help inform my future policy-developing self, of course.

If I hadn’t had my stint at EarthCorps, I probably would have assumed I didn’t know enough to jump in and help fix the gummed-up paint guns that we used for marking trees.  But instead, I pulled up a stool, followed the lead of two amazing people, sat down, picked up a paint gun and answered “well someone has to do it” with “and maybe I can,” my hands turning steadily greener over that summer. (Safety note: wear gloves.  Hindsight).

That last part may not have happened without EarthCorps. Turns out – mechanics can be learned.  By me, even.

I finished grad school and still thought I was going to do only research or policy. But, on a whim, I applied to a forest service position – to be a forester.  I knew that they wouldn’t select me, of course.  I heard that assumption in my head again – “I don’t have validity.”  And I don’t have nearly enough flannel in my closet to warrant being a real forester. But it would be good interview practice.

They told me I interview well.  (Oh.  Uh.  Really? Where is this Idyllwild duty station again?)

They offered it to me.  This came as quite a surprise to me.

Did they really want someone who knows nothing to do this position?  Because I know nothing compared to people exposed at a young age through family.  Right?

But there’s only one way to learn: the same way everyone else does.  And I was being given the chance to do so. I accepted immediately.

I worked for almost four years on the ground as a “dirt forester” with the Forest Service on a National Forest in southern California.  It wasn’t a timber forest, mind you, but there was plenty of work to be done related to thinning, restoration, fuels, and forest health.

In my first months on the job, someone notoriously tough commented on my “can do” attitude when I went to buy supplies to fix the paint guns.  Thank you, Forest Crew.  Thank you, EarthCorps. 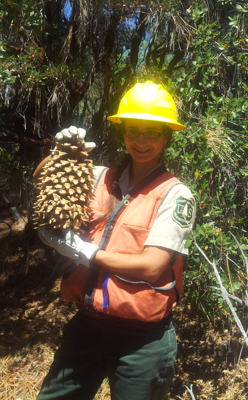 I can still find ways that my experience wasn’t sufficient to be valid – for example: I’ve never run a timber sale myself. But I had my boots on the ground, and I had to do the whole panel of work: the surveys, silvicultural prescription, layout (read: crashing through chaparral with flagging, sometimes with all four limbs suspended off the ground while my phone rings in one of my pockets, probably from the contractor), public environmental review, contract and project management.  In part because of the smaller scale of work on the District, I had to make myself comfortable doing any and all tasks as needed.  This extended to working on fires – a common phenomenon in California.  This is truly something I thought I’d never do. (“Are those people crazy?”)  But I did it.  I jumped in.  And I know I could for other tasks.

And after almost four years, I know the forest operations restrictions related to spotted owl.  I’ve even seen them in surveys – the babies are cute little aggressive fluffballs. But I’ve also marked trees for removal to help restore forests to their pre-settlement structure, which should hopefully also make them more resilient to agents of change like fire and disease.

I’m a policy nerd whose hard hat is splattered in blue marking paint.  I’m a pyrophobe who works on fires.

And now I’m here at my second Forest Service position, working on an incredibly important issue. I’m working as an ecologist for the Forest Service’s Region covering California and the Pacific islands to coordinate our forest health monitoring programs.  About 100 million trees have died in California since the beginning of this drought 5 years ago, and it’s my job to coordinate monitoring forest health for the Forest Service in this Region.
I wonder sometimes why they gave me this position: the daughter of a pair of Jewish software engineers from Los Angeles whose family arrived on any American soil no earlier than 1910 – and never worked that soil. But skills can be learned, flannel can be bought, and if the son of a pair of forest workers is allowed to be a software engineer, then I’m allowed to do this.  And so are you.