The Power of Women Role Models

My first day at EarthCorps, less than 24 hours after I had dyed my hair a bright and distracting shade of blue, I walked into EarthCorps’ classroom for a workshop on non-profit management.

I felt some anxiety and those familiar first day of work jitters. I had joined EarthCorps’ Crew Program late in the summer, meaning most of other crew members had been working together for months. As I took my seat and listened to the speakers, I realized quickly that something about the room was comforting to me.

There was something about the staff here, with their detailed stories of experience in leadership roles and work with chain-saw crews in the back-country – something about these people made me feel more relaxed than normal. It took me a while to realize that it was because most of these speakers, co-workers, and supervisors were women.

I had worked with powerful and inspiring women before, but never in such a vast majority.

As I served my short term as a Crew Member doing restoration in the field, I learned to appreciate the freedom EarthCorps gave me to try new physical tasks, leadership styles, and to challenge myself to take up more space, in the office, in the field, and in the world.

My experience outdoors before coming to EarthCorps hovered right around the level of “comfortable with some mud on my face, but not leaving the trail”. I had grown up hiking with my eccentric Irish mother who would take my brother and I on regular night hikes in a valley near my home in the Bay Area. I never found myself growing bored of scouring the trail edges for salamanders or sticking my feet in the sand where Tennessee Valley meets the Pacific. 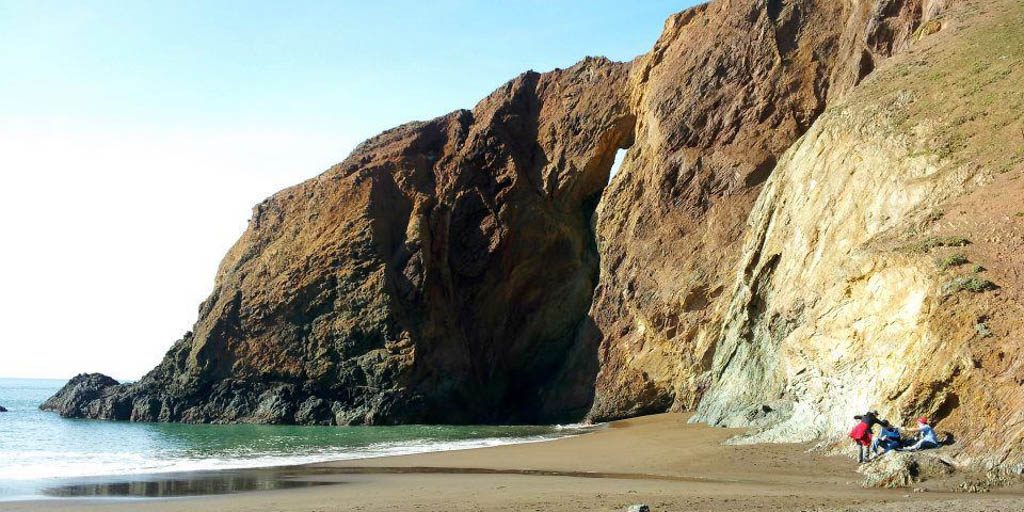 I day hiked, throughout college and beyond. I backpacked a few times, relying heavily on my friends’ knowledge, gear, and encouragement. As my confidence grew, I car camped and hiked by myself along the Sonoma Coast, trying to prove to myself that I could successfully use the new gear I had purchased for myself. I ended up delirious in my tent, nursing a gnarly sunburn and what may have been a minor case of heat exhaustion.

In Spain, despite many unsolicited warnings about my safety as a solo woman, I spontaneously hiked the final 120 km of the Camino de Santiago, buying gear last minute and writing down stopping points and hostel information on a napkin several days before my train departed from Barcelona. My time on the Camino was formational and validating, allowing me to build confidence and some amazing friendships with fellow perigrinos (pilgrims) on the trail. 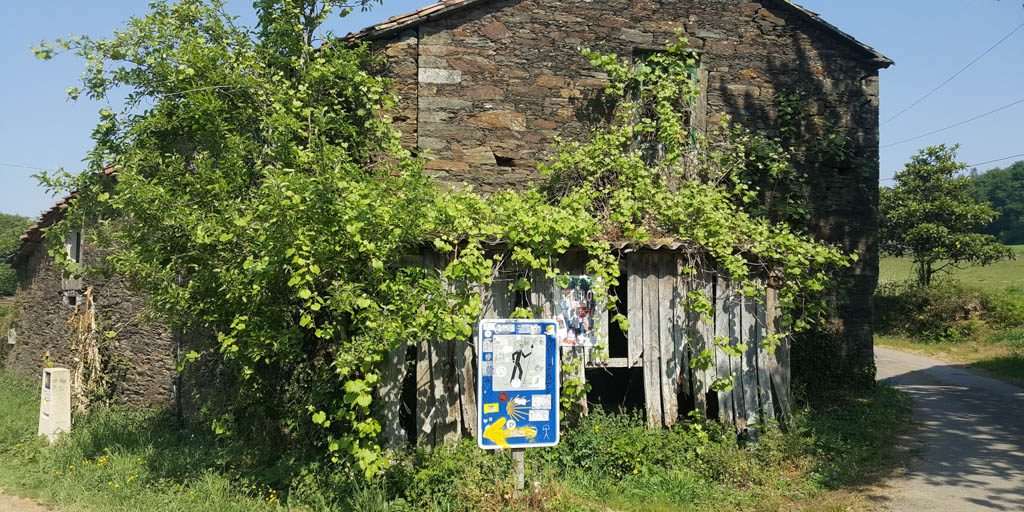 All of these experiences informed my perspective as I walked into EarthCorps that first day.

Using tools and doing manual labor 40 hours a week intimidated the heck out of me, never mind living on an AmeriCorps stipend. But I was here, and I was going to try.

My first field day was a bit dramatic. After fashioning a makeshift belt from a hair tie for my too big Carhartts, I packed myself into a van with a bunch of strangers and headed off to a park in West Seattle. I watched as this hardy bunch of folks launched themselves into blackberry bushes and ivy patches, maneuvering down slopes and working smoothly and confidently, while I lurked in their shadows, asking too many questions and trying to remember everyone’s name. The day was going well until the last half hour, where my newly found overconfidence led me to pull some ivy around a fallen log, unleashing a bunch of angry ground bees which quickly and painfully took their revenge.

Those bee stings didn’t stop me from showing up to work the next day.

I finished out my first week, ending my days sore, sweaty, and barely able to stay awake until 7 pm. As I spent more time in the field, my perspectives of my coworkers, especially the female crew leads, gradually evolved from that of super-humans, whose abilities were far beyond my capabilities, to one of accessibility, assurance, and affirmation. These women were role models, in and out of the field. If I took chances and pushed myself to sharpen my growing edge, I would hopefully pick up some of their leadership habits and boldness.

In my first few weeks I quickly learned to remove blackberry and ivy as efficiently and painlessly as possible, how to stage plants on a restoration site, and most importantly, how self-discipline played out while serving an AmeriCorps term.

Some of my most tangible memories were ones in which I was entrusted with tasks I never thought I would have been able to do in the past. I was instructed in using a brushcutter, enforcing raised beds with power tools, and moving boulders and breaking rocks to build a reinforcement wall on Rattlesnake Ledge. In each of these scenarios, I was hesitant, afraid of hurting or embarrassing myself, and felt the regretful desire to hand off the task to another person who my socialized brain told me was more capable, often a male crew member. These hesitations waned as I saw my female crew members stepping up to tasks without a second thought. I felt the continued trust my crew lead and other staff seemed to have in all crew members’ abilities. If I turned down a task one day, I was asked the next day if I wanted to try it.

Wearing down my perceptions of what I was capable of was a daily routine, and thanks to the perseverance and encouragement of the strong women and men around me, I eventually grew more confident in my abilities. I could swing pulaskis at gnarly rootballs, layer heavy rocks just right to support the weight of thousands of bustling hikers, or take a brush cutter to a towering patch of blackberry. It was empowering to see myself grow physically stronger and use tools that just a few months ago I wouldn’t have been able to name. I learned to appreciate and emulate the patience and generosity of my crew mates in answering my endless questions, teaching me new skills, and reaching out when I was struggling. 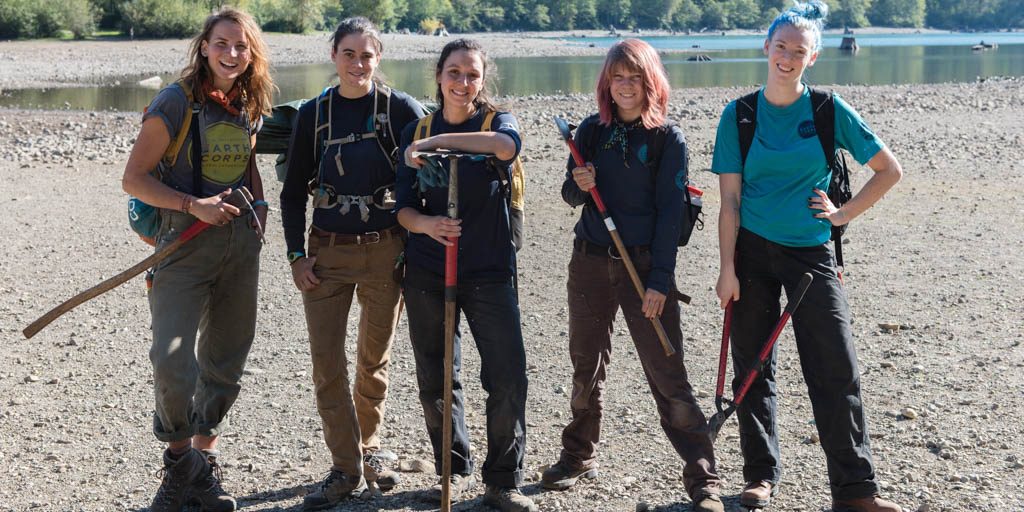 Despite the understanding of gender equality and empowerment at EarthCorps, I witnessed the lag in public perception and understanding of women’s role in environmental restoration and physical labor. Female crew leads were ignored by folks who instead directed questions to the tallest male in the group, my female crew members and I were asked if we needed help in many situations, comments like “That looks heavy!” and “What are you ladies up to here?” were heard on work sites. I’m certain that male crew leads or crew members didn’t experience the same interactions.

I’ve realized that a major factor in shifting public perception and breaking down preconceived notions about who can do restoration work comes from exposure. We need more visual representations of changing times, undeniable proof that women can wear blue hard hats and carry logs up trails. 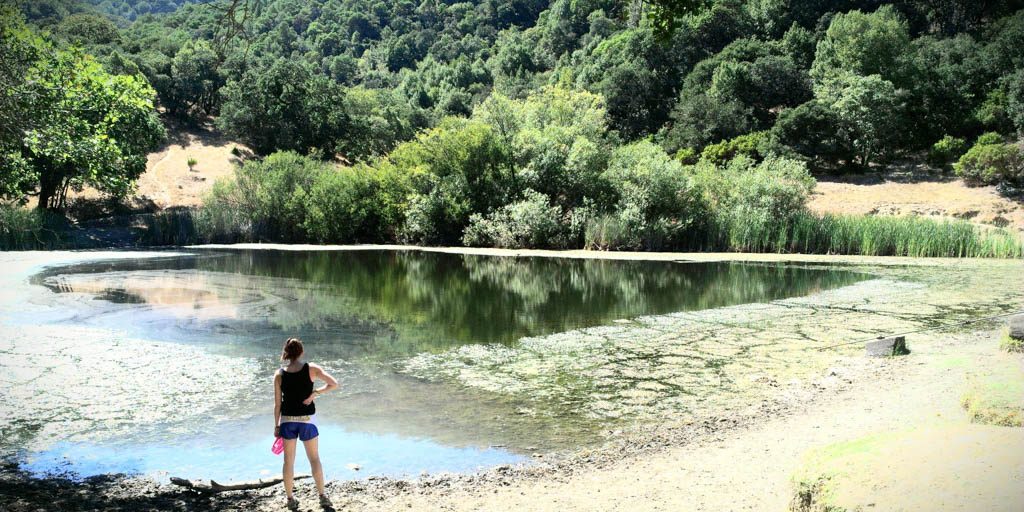 I know that my perception has been irrevocably changed by the presence of so many female role models at my job. I hope that I can provide that same example to volunteers at my events this year, especially young women who enjoy being outside. I plan to continue developing my strength and confidence, to be unapologetic in my instruction and abilities, to take up space and provide space for others to grow.