The Birds and the Bees

You’ve seen it in the news:

Honeybee populations are declining at an alarming rate across the country. Unfortunately, it’s not just the honeybees that are losing ground. Other pollinators close to home, like certain butterflies and bumblebees that are native to the Puget Sound region and vital to our forest’s health, are declining towards extinction at rapid rates.

Why should we care? 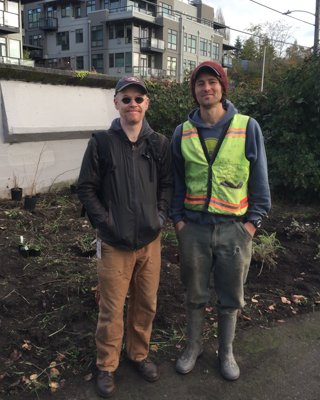 Plants and pollinators maintain a beautiful relationship dating back millions of years! Pollinating bees, butterflies, beetles, birds and moths are important to our ecosystem because they transfer pollen between flowering plants as they flutter, fly, buzz, and crawl between them to snack on the sugary nectar and protein rich pollen. However, when there aren’t enough native plants to sustain their livelihoods, the pollinators can’t eat. When that happens, there aren’t enough pollinators to transfer pollen and sustain the plants that need them. In return, those plant populations shrink and it turns into a continuing cycle that is harming our forests.

What can we do about it?

Sit back and watch it happen? No! EarthCorps is going to create a pollinator corridor.

A pollinator corridor is a series of blooming habitats flourishing with the native flowers that pollinators need to survive. These gardens are linked close enough to one another so that the insects and birds can go from one urban oasis to another, and reliably get the nourishment they need as they spread pollen among plants.

As a graduate student at the University of Washington, Matt pioneered EarthCorps’ first pollinator garden on the UW campus at the Kincaid Ravine Natural Area. The garden is adjacent to the highly visible Burke Gilman Trail. It once was a tangled wasteland of blackberry, ivy, and homeless encampments before restoration started in 2014. Now it features thriving pollinator plants buzzing with insects, educational signs, and quiet sitting areas for people to relax and take in the beauty next to the trail. 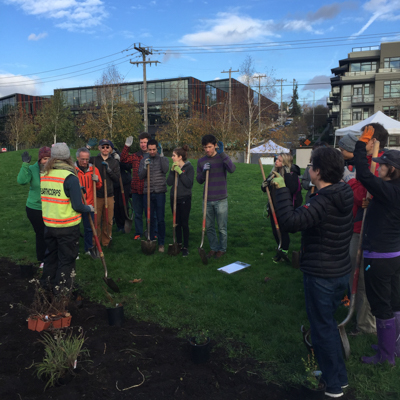 But one pollinator garden isn’t enough.

Enter Chad Freeman of Adobe, a frequent EarthCorps volunteer. Chad was intrigued when Matt discussed the possibility of creating a Pollinator Corridor along the Burke Gilman Trail. For some time, he had been searching for a project for Adobe employees to adopt and steward close to the Fremont campus. Together with Seattle Parks and Recreation, EarthCorps identified a site near the Adobe office just west of Gasworks Park, and this fall – with support from Adobe and the Ferguson Foundation –   the first community planting event broke ground at the Gasworks Park pollinator garden. Chad rallied more than twenty employees from Adobe, who were joined by students from the UW, and a group of committed volunteers from Friends of the Burke Gilman Trail. Together, the volunteers installed 400 native pollinator plants in two beds at the west end of the park.

As the corridor project continues, it will also beautify the areas along the Burke Gilman trail, many of which are choked with weeds like Himalayan blackberry and Scots broom, or lay barren as mowed grass medians. Native, flowering pollinator plants will improve the appearance of the trail for all of us as well as provide valuable habitat for birds and insects.