Revina Moore (2015) was invited to speak about her EarthCorps experience at the US Secretary of the Interior’s portrait unveiling and farewell ceremony in Washington, DC last week.

Throughout her career, Sally Jewell has been an avid supporter of the conservation corps movement and EarthCorps. A cornerstone initiative of her term as Secretary of the Interior was the Let’s Move Outside campaign to get millions of kids to play, learn, and serve outdoors.

It was an honor for EarthCorps to be part of her farewell ceremony. Read Revina’s words spoken at the event: 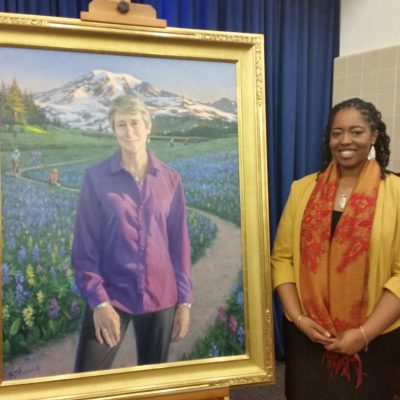 I was raised in Harlem, as an only child with a single mother, and a father I never knew.  For 20 years we lived in a subsidized, renovated tenement building, with walls so thin you could hear the rats scuttling around in the dark voids. Outside, the unmistakable sound of gunshots occasionally pierced the night.

Most stories that start out like this have predictable endings, but mine changed. And why? Because my angel of a mother, Vernell Moore – who is here in the audience today – knew that the world outside of our neighborhood had so much more to offer. She sent me to private school, forgoing her own college education in the process, and she worked hard to make sure that I had other places to be.

I spent my childhood summers and weekends in New York City’s beautiful parks, and exploring the wonders of the Adirondack Mountains. I graduated from high school, enrolled in college, and soon found that like so many young people, I had no idea what I wanted to do with my life. So I put my studies on hold, took a few odd jobs, and eventually I came across this incredible opportunity to get back in touch with nature by serving my country in a conservation corps.

By that time it had been close to 10 years since I had set foot on hiking trail, but I knew in my heart that the life and the work that I wanted were outside, where I could smell the trees, and see the sky.  So I flew 2000 miles across the country to get the training and experience I would need to embark on a new career path.  I joined the ranks of a well-known Seattle-based non-profit called EarthCorps, and I committed myself to learning and growing as part of an intentional community of people who could not have been more different from me.

“I have never worked harder, or felt stronger, or more purposeful in my life than I did while I served as an AmeriCorps member with EarthCorps”

While I had spent the last few years of my life working behind a desk or a cash-wrap, most of my crewmates had been out exploring the natural world, teaching and learning outside. There were about 40 of us in total: strangers from all over the nation and the globe. In the 10 months that we served together, carrying one another through grueling, and satisfying work days, those strangers became my family.

Through mud, and rain, through fatigue and doubt, we healed the earth with our hands while challenging each other every day to live out our shared values of service, leadership, and community. I have never worked harder, or felt stronger, or more purposeful in my life than I did while I served as an AmeriCorps member with EarthCorps, and I am so proud of what we accomplished during my time there.

We planted thousands of trees and shrubs, and removed hundreds of acres of invasive ivy and blackberry to improve the health of the forests and salmon bearing streams of the Pacific Northwest. We worked with over 10,000 volunteers, engaging the local community in stewarding their beloved Puget Sound.

I entered EarthCorps as a as a novice, with a hunger to make tangible and immediate change in the world. I now have hundreds of hours of hands-on experience behind me to stand on, and I can say with confidence that I am an environmental professional, trained in ecology restoration, project planning, and volunteer management.  But what makes the experience even more meaningful and worthwhile is this: that long after my service term is complete, the work that we started will be carried on for years to come by the corps that come behind me.

I think about the corps members I served with every day, and the memories I have from that experience have given me so much hope as I’ve embarked on the next phase in my journey. I’ve seen first hand that it only takes a small amount of passionate, and highly dedicated people to create lasting change. But that kind of change doesn’t happen without strong committed leaders.
So in closing, I offer my heartfelt appreciation to you, Secretary Jewell, for believing in the power and potential of young people and for using your position, your voice, and your network to grow the youth conservation corps movement. On behalf of the 25,000 youth corps members who served, learned, worked, and played on public lands in 2016, I humbly thank you for your service, your dedication, and your inspiration.

Speech given at Secretary of the Interior Sally Jewell’s portrait unveiling in Washington, DC on January 13, 2017. 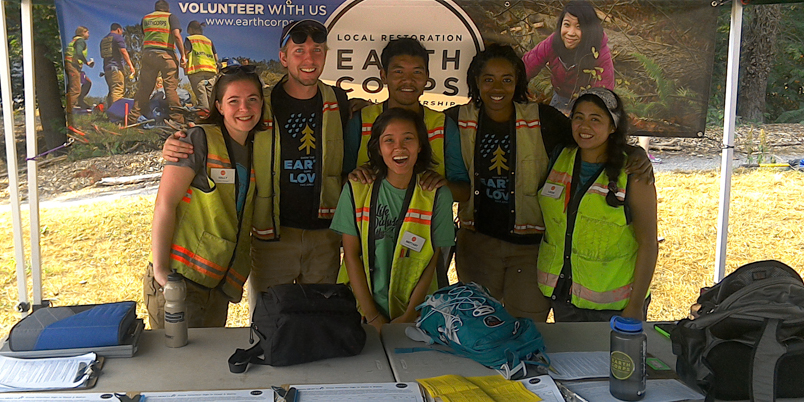