“In taking
responsibility for our
own lives and work,
in unmasking the
connections of our
labor and nature,
we may find a way
to break the borders
that imprison nature
as much as ourselves.
Work, then, is where
we should begin.”
-Richard White

First, would you describe your path to and through EarthCorps.

I grew up in the suburbs of Chicago as the oldest of four. We grew up playing outside. In the summertime, my mom would send us outside and tell us not to come back until it was time for dinner. We would ride bikes all over, I would read outside a lot, and my brother and I would play different sports. Being outdoors was always part of our culture and being. Being outside was not just about sport, but subsistence. For instance, my family subsistence hunts. A deer would feed us and our extended family. Our connection to land is ingrained into our way of being.

As I got older, there weren’t really outdoor experiences presented to me in the way that there are for youth in the Northwest. The only experience I remember was when somebody from Minnesota came to our school to talk about a canoe trip to the Boundary waters. As he described it, I was really interested, but I also remember thinking that I wasn’t sure if my family could send me. I didn’t end up applying or going, but I think about it a lot, even more than twenty years later.

For college, I went to a state school in Minnesota nestled in the Mississippi river valley and studied English. It was beautiful, but I still hadn’t been exposed to jobs in the outdoors, and didn’t even know that it was a career path. I did my last semester of school in Spain and lived there for a while. When I came back, I felt disillusioned with dominant U.S. culture.

I felt that I needed to keep exploring and wasn’t ready to settle down into ‘life after college’. When I found EarthCorps, I looked at the job description and thought, ‘I don’t know what any of this means, but it sounds cool.’

When I filled out the application, I felt like I had never been asked those kinds of questions before, like, ‘What do you think the reasons for poverty are?’ or ‘What is an environmental issue that you’re interested in or concerned about?’ I remember writing about indigenous rights to lands. I had been following the deforestation going on in the Amazon. I was really surprised that I got a call back, but even more surprised when they hired me, because I didn’t have any sort of formal environmental background. The hiring team thought that I should have a chance, and I’m really grateful for that.

When I was at EarthCorps, it occurred to me that I was a lot stronger and smarter than I gave myself credit. Being able to do work in the outdoors in a physical capacity allowed me to step into my own power emotionally and mentally. After being a corps member, I was interested in pushing myself further and applied to be a crew leader. It was challenging, and I learned a lot about myself and how to hold relationships. I learned how to lead a team and am still learning how to do that. At that point, I was just starting to get comfortable with the idea of challenging myself in new and sometimes uncomfortable ways. 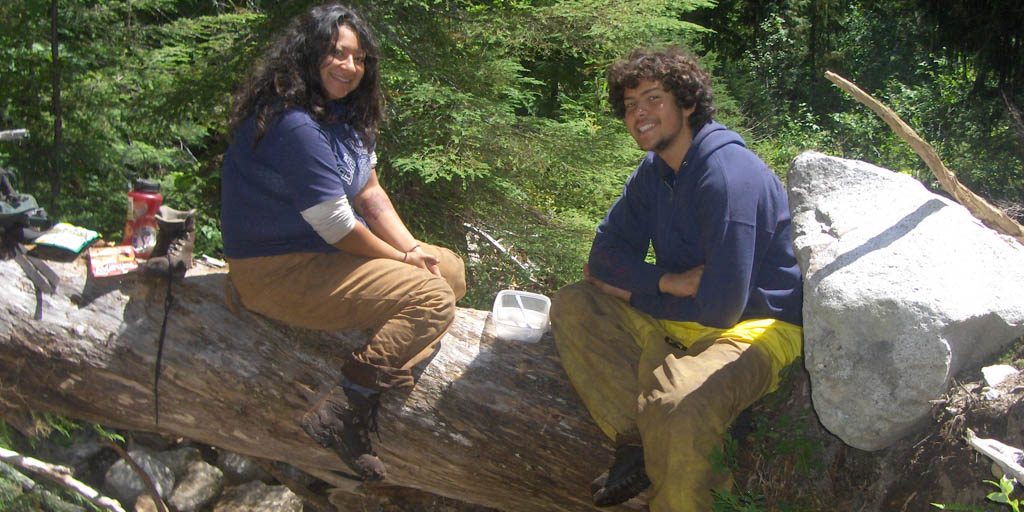 I could never have guessed that I would be working for a U.S. Representative. With my current job, working within federal government is new for me. I have been in this position for under 2 years and I learn something new every day. The transition as someone who used to work in nonprofits to being a representative of the federal government is challenging and at times uncomfortable. In that discomfort is where I am able to grow and gain a deeper perspective on my role. For me, growth without discomfort isn’t really growth.

The folks that work at EarthCorps have always been supportive of me and the different paths that I’ve taken. After I graduated, EarthCorps helped me get a job building trails with the Forest Service, which was an amazing experience. From there, I did a series of physically demanding seasonal jobs until I got to the point where I was ready to challenge myself in different ways. I began full-time work supporting a restoration and community engagement program at a small nonprofit that eventually merged with EarthCorps. I helped to navigate that transition, which was challenging and uncomfortable since I had never been a part of that kind of process before. All of those challenges have helped me get to the next step in my career.

Have you been able to offer leadership opportunities to someone
else?

Yes, that’s critical to my values and the work that I do. I know what it’s like to not have exposure to some of the amazing things that are out there in the world, so I try to make myself visible in this field as a woman of color. I am committed to sharing resources and supporting the leadership of others. Young folks of color don’t always see themselves in environmental spaces because for a long time we weren’t included. My younger brother is an EarthCorps alum and he’s always been an outdoorsman. Even so, careers in the environmental field weren’t presented to him in the full breadth that they could have been. He applied for EarthCorps, and now he works for King County Department of Natural Resources and Parks. I’d like to think that my involvement in EarthCorps was some sort of inspiration. Since leaving EarthCorps, I’ve been involved in working with youth in a lot of different ways. When I was at the Student Conservation Association as a recruiter, I looked for folks who were even just the slightest bit intrigued about working outdoors or doing some work with a conservation ethic and supporting the values of healthy community and healthy natural spaces. My hope was that if I could help foster a great experience in the outdoors for someone that they would carry that experience into other endeavors. Before I came to work for the Congresswoman, I helped to design and launch a fellowship program for recent college graduates of color interested in marine conservation. This national program is now in its third year. I’m proud to say that one of the people that I hired that first year is now coordinating the fellowship program.

What’s one word of advice that you have for enabling an inclusive
space?

Listen to people who are not historically included. I think that’s the biggest piece: think about whose voices and stories are missing from the decision-making tables, from media or whose stories are not being told and seek to change that dynamic. When depicting people, are you depicting them as true to who they are, or are you playing to a stereotype?

I also think making sure there are pathways to personal and professional growth for people is important. There are not enough people of color in leadership positions in C-Suite and director roles within environmental organizations. It’s important for folks to examine their organizational culture, processes and systems with an intersectional lens then dismantle exclusionary practices to make them more inclusive and equitable. Think about who you want to include and make sure they’re part of the process from the get-go and engaged in a sustained and meaningful way.

What do you see as the challenges and opportunity of working
within the federal government?

The United States has systems and processes that are hundreds of years old and it can be a challenge to push those systems to be responsive to the changing of communities and the people that we represent. Communities are always growing and learning more about themselves and sharing more about themselves. The government can take a while to catch up to those dynamic shifts. With that challenge, government must think critically about how we can be the most responsive to the people that we represent. But I also think there’s opportunity in that. As we learn more about our country and what systems work well and which do not, the opportunity is leveraging that difference and bringing unlikely partners together to talk about important issues that affect everybody. There are so many ways to change the system that are conducive to supporting the most people and providing the most benefit.