It takes a watershed approach to clean up Puget Sound.

What do I mean by that? To improve the health of Puget Sound, we have to work together to restore the lands and waters that feed into the sound.

The EPA defines a watershed approach as one that involves all stakeholders, including federal, state, local and private sector actors. It is geographically focused and community based. It integrates both regulatory and voluntary programs. It is based on sound science. And it uses adaptive management.

Through innovative partnerships, EarthCorps is starting to implement a watershed approach to improve Puget Sound health. Here’s a look at some of our work across 6 Puget Sound watersheds. 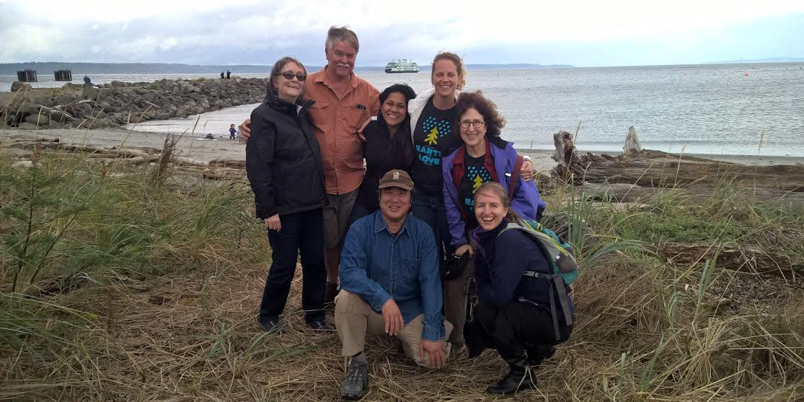 The Duwamish is Seattle’s only river.  This watershed stretches from its headwaters in the Cascade Mountains where it originates as the Green River to the Puget Sound. The Duwamish flows through wilderness, farmlands, tribal lands, suburban communities, and urban industrial areas into the Puget Sound. As part of the Duwamish Alive Coalition, EarthCorps collaborates with nonprofits, community groups, government, and business to restore the health of the Duwamish.

EarthCorps’ Sound Steward program operates at multiple sites along the Duwamish. Sound Stewards complete volunteer training and commit to steward their “own” restoration sites, investing at least 40 hours (and often many more) each year, as well as organizing volunteer events at their sites. 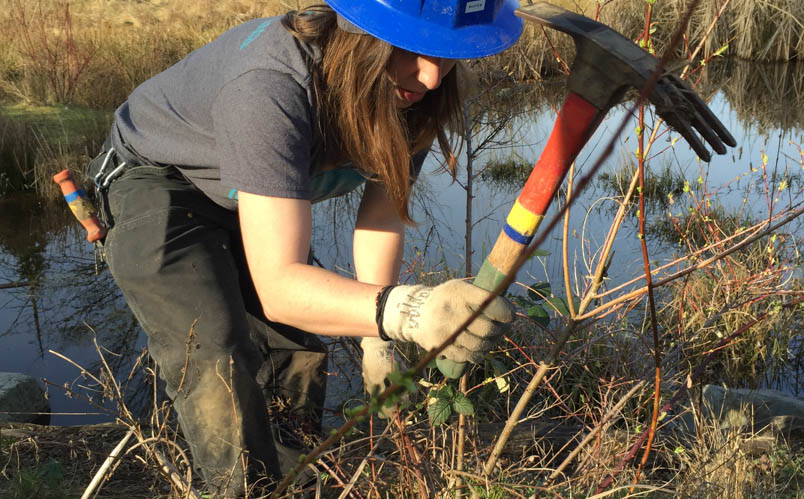 In 1983, Friends of the Hylebos began working to protect and restore streams, wetlands, forests and open space throughout the Hylebos watershed. The watershed lies primarily in Federal Way and stretches from South King into Pierce County. In 2011, Friends of the Hylebos became part of EarthCorps. At volunteer events held throughout the year, EarthCorps engages nearly 1,000 community members in restoration efforts throughout the watershed. At an annual event called Storming the Sound with Salmon, elementary and middle school kids from over 30 Federal Way Schools raise salmon in their classrooms and release them into Hylebos Creek. EarthCorps’ Hylebos Watershed Action Plan envisions the Hylebos Watershed as the healthiest urban watershed in Puget Sound.  The plan outlines three key priorities to accomplish this: conservation, community engagement, and stewardship.

Hylebos Creek drains into Tacoma’s Commencement Bay, where EarthCorps is working with state and federal agencies and local tribes to steward 17 Superfund restoration sites in perpetuity. Commencement Bay is now a national model for recovery, where vibrant populations of birds and fish live in once heavily polluted industrial areas. This area transformed from one of the most polluted spots in the country to a bright spot for environmental restoration because of the perseverance and commitment of multiple stakeholders. 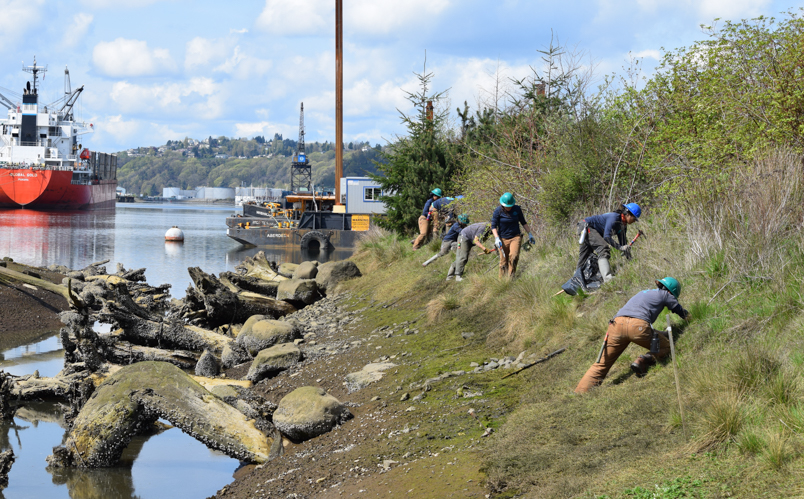 Along the Puyallup River, which also empties into Commencement Bay, EarthCorps crews are working to expand elk habitat. In an innovative partnership with the Puyallup Tribe, EarthCorps is opening up habitat corridors by removing invasive plants that created barriers and limited habitat available to elk which limited herd size as a result. Tribal youth will join EarthCorps this fall to install native plants in the newly expanded habitat in an effort to preserve a vital cultural resource for the tribe. 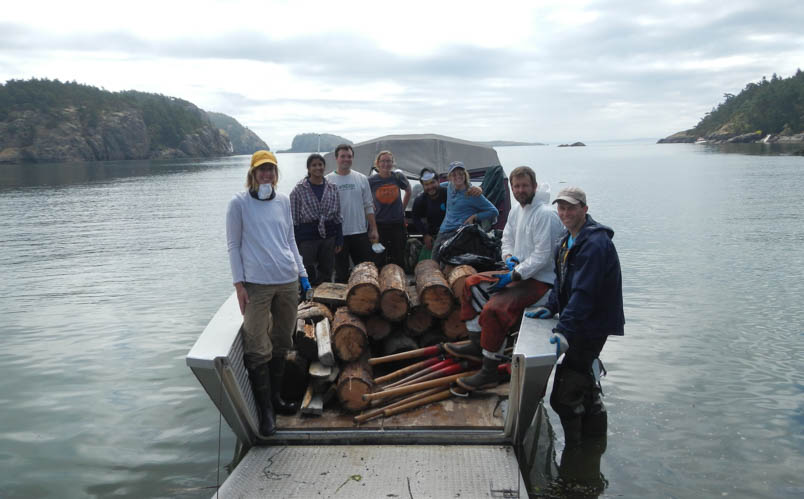 For the past several years, EarthCorps has worked along the Skagit River to create riparian buffer zones on agricultural lands, which improve water quality, restore wildlife habitat, and demonstrate that commercial agriculture and biodiversity can coexist. In a partnership with Skagit Fisheries Enhancement Group, National Fish and Wildlife Foundation, and Restore America’s Estuaries (RAE), EarthCorps crews are restoring land along the Skagit River and adjacent creeks to improve habitat for Chinook salmon that provide the primary food source for endangered orca whales.  Also as part of EarthCorps’ work in Skagit County, our young adult crews had a unique opportunity to work with the Samish Nation on a creosote log removal project on remote beaches accessible only by boat. The removal of these toxic logs impacts Puget Sound health, along with improving the watersheds that drain into the sound.

EarthCorps leverages our watershed approach through innovative partnerships. In the Snoqualmie watershed, we are working with long-time partner Mountains to Sound Greenway Trust to plant trees along salmon bearing creeks. In the Snohomish River watershed, we partnered with Restore America’s Estuaries and the Tulalip Tribe on a ground-breaking Coastal Blue Carbon Study that measured the carbon sequestration potential of coastal wetlands. The study was referenced in the National Ocean Council’s National Ocean Policy highlights report, which outlined many of the recent Federal actions taken in collaboration with states, regions, and communities to ensure that our ocean resources remain safe and healthy, and that our ocean economy continues to grow. The Snohomish watershed is a key focal point for EarthCorps’ work addressing toxic stormwater runoff through green stormwater infrastructure, such as raingardens and bio-swales. 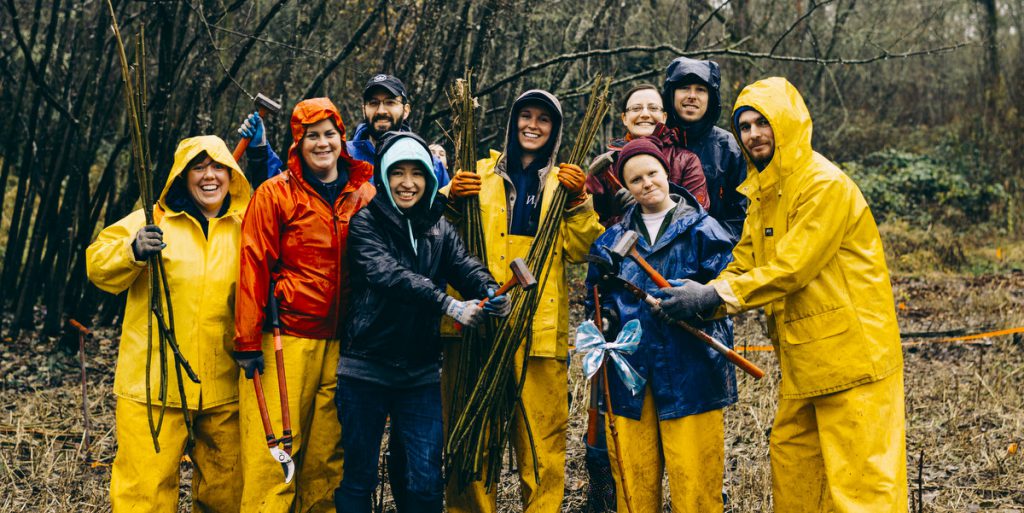 EarthCorps is working around Puget Sound on hundreds of projects that affect the health of watershed ecosystems. EarthCorps’ work in forests, urban parks, along streams, in wetlands and on shorelines boosts the function of the precious watersheds that impact Puget Sound health. In each watershed, EarthCorps amplifies our impact via our alumni, who are restoration leaders at organizations including Forterra, Mountains to Sound Greenway Trust, The Nature Conservancy, Seattle Public Utilities, the WSU Stormwater Center, and many more.

What makes our watershed approach so effective is our breadth of practical, on the ground experience, community engagement, collaborative partnerships, and a proven 24-year record of accomplishment.